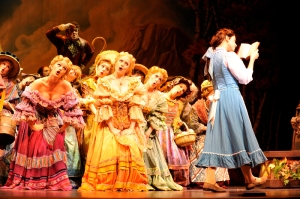 I heard all the hoopla leading up to its release. Segments of conservative Christianity were crying, “BOYCOTT!” because of the inclusion of a gay character. I’ve never been one for blindly joining anti-cultural bandwagons, so naturally I concluded I would need to see for myself. “What’s the big scuttle? Is there actually reason to be worked up?”

I went curious but prepared for some level of humdrum. I anticipated saying to myself, “They took the oh-so-familiar story and dressed it with ultra-realistic techno wizardry. Okay. That was kind of cool. And oh yea, they pushed the gay agenda.” I expected to be underwhelmed.

Instead, as our family settled in for the late-afternoon show, I found myself marvelously entertained, enthralled by the amazing cinematography. I was thoroughly captivated by characters, color, musical score, and brilliant pacing. Yes, a character was portrayed as ever-so-subtly gay, but I found myself wondering, “Would I really pick up on that if I wasn’t looking for him?” In actuality, this 2017 version seemed less sultry in male-female interaction than the old cartoon. I thought, “Wow! Less cleavage and sexual innuendo—why weren’t Christians applauding this cleaned up rendition?”

But there’s actually a bigger issue that deeply disturbed me. I’m stunned no one has yet cried out about such a pressing, flagrantly obvious theme.

All across this “tale as old as time,” the castle’s one-time-workers—now cursed household furniture, décor, and dishware—have been actively serving to orchestrate true love, attempting to reverse the curse, both for the Beast and their own existence. Toward the climax, the final rose petal has dropped, the Beast has been shot, and the great castle’s curse is culminating. Very soon, all will be permanently immobile and forever lifeless. The scenes are heavy, dark, and sad with regret. Love has not been found. The characters will be trapped, frozen in place, and lost forever.

With just moments remaining, Cogsworth the Clock and Lumiere the Candlestick realize the end is near. All along, they have been gradually losing their humanity, becoming harder, less functional and life-like. As they are about to lose all mobility and their ability to speak, Lumiere proclaims, “It’s been an honor to serve with you, Cogsworth.” In the next beats, every character stands still. All faces and motion vanish. The Beast has died, and his entire household is now still as stone.

Must confess, I was gushing tears in the theater’s darkness. (Yes, I can be a sentimental schmuck if a story deeply grabs me.) Truth be told, my soul was ambushed by the parallels, having said goodbye to several close family and friends in recent years. Such depiction of the solemnity of the curse caught me off guard. Suddenly, I was crying all over again about losing Dad, losing Grandma, as well as just recently saying farewell to Sherilyn and Bob in our church family. And I was also deeply soul-moved—extremely worked up by something bigger. I knew what was coming.

So do you. As Belle weeps over the Beast and confesses her true love, Agathe the Enchantress revives the rose. Love wins, blowing the mighty winds of change. The Beast rises and is marvelously transformed into the Prince once again. Then one by one, every character including Cogsworth and Lumiere come back to glorious life, now fully human once again. People who had been estranged for many years are reunited, now fully alive and joyfully dancing.

In the theater’s darkness, I was bawling once again. As tears gushed, I felt my chair shaking. These were tears of triumph, born of oft-forgotten, albeit vitally important workplace theology. Truth be told, this scene marvelously portrays a dusty concept known as transformatio mundi. It’s Latin for the eschatological belief that with the end-times arrival of New Heavens and New Earth, all will be cleansed, fully transformed. All of “the house” will be renewed, gloriously redeemed—all of Creation, including the servants, believers in Christ Jesus along with their grace-motivated, God-glorifying work (Ephesians 2:8-10; Romans 8). Very closely related is the marvelous concept of resurrection. Christ rose in his new, physical body, fully alive. His own work of gracious salvation and bodily resurrection supply the first taste and the precious promise of such bodily resurrection for every human who by faith trusts in Him (1 Corinthians 15).*

Gracious, selfless love. The curse reversed, resurrection, and powerful transformation. Please tell me again why conservative Christians cried, “Boycott!” Hours after seeing the movie, I’m still gloriously disturbed. Instead of sporting a grumpy outlook over a possible gay character, I wish we would be worked up by the resurrection message so marvelously portrayed by such a movie. We could be motivated to persevere in our daily good work in God’s kingdom. After all, we know what’s coming. The house and servants will not stay cursed. It’s Gospel. Gracious love wins. There’s glorious transformation yet to come.

But thank God! He gives us victory over sin and death through our Lord Jesus Christ. So, my dear brothers and sisters, be strong and immovable. Always work enthusiastically for the Lord, for you know that nothing you do for the Lord is ever useless. (1 Corinthians 15:57-58)

*For further reading on these provocative concepts, grab a copy of Darrell Cosden’s The Heavenly Good of Earthly Work.