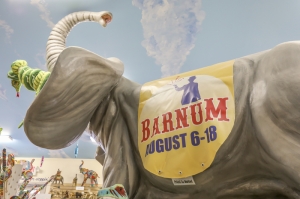 Movie lovers have lauded the film. But to put it kindly, I was bothered. Certainly, there are praiseworthy elements. The story itself is captivating and keeps us coming back. How many of us have watched The Greatest Showman now how many times, primarily out of its success in supplying joyous escape? Story guru Robert McKee maintains that a superbly told story “makes time vanish.” McKee declares:

“The story power of a fine play, novel, film or TV series sweeps us through time until the entertainment spell suddenly breaks and we glance at our watch in amazed wonder: ‘Wow, was that three hours?’ Some story-goers plunge back into a much-loved classic for a second, third, or more reliving.”[1]

Such story phenomenon is certainly at work with The Greatest Showman. And of course, the musical score is breathtaking. Choreography is superb, and the brilliant colors on the tonal pallet are nothing short of breathtaking. Some scenes leave you wondering: Is this a film or a painting?

But I was still bothered.

I could readily say I was bothered by the glamorizing of Barnum’s dishonest, shyster ways. Once again, Hollywood successfully convinced us to love and root for a crooked and morally corrupt individual. His business practices were abominable, but viewers find themselves cheering for him. Nevertheless, that is not what most bothered me. Such skillful crafting of characters and a twisting of the audience’s love-hate capacity has been a hallmark of truly great story telling for centuries.

I could stomp my feet, bothered by the liberties that were taken with P.T. Barnum’s actual history. While the movie’s story line lands some threads right and tight, there are numerous points of departure and inaccuracy with the true story of this over-the-Big-Top character. For a wonderfully researched and mesmerizing rendition, read Matthew Goodman. The movie paints the picture of Charity’s family as ultra-snobby, disapproving of Phineas. Solid history reports it was actually the other way around. Mother and other relatives believed that a young man as promising as Phineas “should set his sights higher than a local seamstress.”[2] The list of discrepancies between the film and true Barnum history could go on and on. But that is not my biggest gripe. Movies have been twisting history for many moons.

My genuine, gargantuan gripe comes into play as the story’s tension crests the hill and our Showman’s crisis winds ever tighter. Barnum is wrestling with what’s truly most important. Across his life, P.T. has been constantly seeking to satiate his never-ending thirst for accolades from the upper crust, from highbrow family, from newspaper reporters, and from the ever-fickle adoring fans. Now he has the opportunity to take off on a cross-country concert tour with Jenny Lind, the breathtaking European soloist (who none-too-ironically sings Never Enough.) But could he—would he instead—choose to stay with his ever-faithful circus troupe and his lovely family?

And right here is the real rub, the issue that bothers me most with this movie. The story line strikes a raw nerve for all of us who step onto life’s stage. The issue of “what matters most” is indeed the pressing issue for every leader, every artist, every public speaker, every athlete, and every person in business large or small. At the end of the day to a very real degree, we are all show people. We are faced with the push-and-pull, tug-o-war question: Will I live my life for the applause of the audience, for their approval, for the ratings, and other people’s love?

Jesus actually worked on this issue in the Gospels when confronting the Pharisees—and really all of us. His use of the word hypocrite was borrowed from a descriptive term used of play-actors of the ancient Greek world. The great showmen of the first century wore masks. They were out to impress, to play to the crowds. Jesus’ bottom line wisdom on this issue: “Don’t be like the hypocrites” (Matthew 6:1-6).

I realize the real reason that I am bothered by The Greatest Showman. It hits a nerve; there is a little too much P.T. Barnum in me. And based on the current landscape of humanity, it seems it is true for so many of us as leaders. This is a pressing issue, whether you are the President, a powerful preacher, a top-level executive, a high school student in your first role, a big-name performer, a public speaker, or something of an emerging celebrity at any level in society.

At an extremely poignant pivot in the movie, Phineas’ wife Charity lands the clincher line:

“You don’t need everyone to love you, Phin. Just a few good people.”

It’s the cash money wisdom of the story. When she said it, I gulped. I need to deeply believe that every day. We all need to live in light of it.